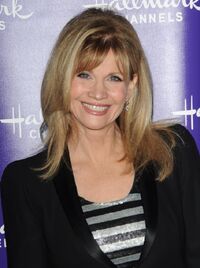 Markie Post (born Marjorie Armstrong Post on November 4, 1950 in Palo Alto, CA) is an American Actress, Model, and TV personality. She is best known to TV audiences for her roles as bail bondswoman Terri Michaels on ABC's The Fall Guy (1982-1985), (her most notable role) public defender Christine Sullivan on the NBC sitcom Night Court (1985-1992), and Georgie Anne Lahti Hartman on the CBS sitcom Hearts Afire from (1992-1995). She appeared as a frequent celebrity guest on both The $25,000 Pyramid and The $100,000 Pyramid.

Native of Palo Alto, California, the daughter of scientist Richard F. Post and Marylee Post. She grew up in Walnut Creek, California, and attended Las Lomas High School where she was a cheerleader. She later earned her Bachelor of Arts from Lewis & Clark College in Portland, Oregon.

Prior to a career in acting, Markie worked on several game shows. She began her career with the production crew of the Tom Kennedy version of Split Second as well as serving as associate producer of Alex Trebek's Double Dare and eventually appearing in front of the camera from time to time as one of the card dealers on the Jim Perry version of Card Sharks. She is also perhaps well known on the Game Show circuit for her frequent appearances on both The $25,000 Pyramid and The $100,000 Pyramid as well as appearing as a celebrity panelist on the NBC game show Super Password and on a November 1994 celebrity episode of Jeopardy! alongside actors David Hyde Pierce and Tim Matheson.

Some of Markie's acting credits include the pilot episode of Simon & Simon "Details at Eleven" in 1981, two episodes of The A-Team as two different characters in the 1983 episode "The Only Church in Town" and the 1984 episode "Hot Styles", respectively.

She also appeared in the science fiction series Buck Rogers in the 25th Century and as Diane Chambers' best friend on the NBC sitcom Cheers (where her future co-star Harry Anderson frequently guest starred on), before eventually landing the role of Terri Michaels on the ABC action drama The Fall Guy.

After The Fall Guy, Post moved on to playing probably her most notable role to TV audiences: Public Defender Christine Sullivan on the NBC sitcom Night Court. First appearing on the series in a guest starring role during the show's second season before becoming a series regular from the third season all the way to the series' end in 1992.

From there, she played Georgie Anne Lahti Hartman on the comedy series Hearts Afire, co-starring alongside Three's Company star and comedian John Ritter. Post has also had regularly re-occurring guest star roles on The District and on Scrubs as the mother of Dr. Elliot Reid.

She also had a starring role in NBC's 1995 movie Visitors in the Night. Markie also appeared in the 1997 TV movie Survival on the Mountain. She worked on the comedy movie Cook Off! as Christine Merriweather.

She also shared a mini Night Court reunion with former co-stars Harry Anderson and Charles Robinson in an episode of 30 Rock titled "The One With the cast of Night Court", staging a mock reunion of the Night Court cast.

Post also lends her voice to the character of June Darby on the animated series Transformers: Prime.

Markie has married twice, first to Stephen Knox, whom she met while attending Lewis and Clark College. They married on June 11, 1971 and divorced on September 5, 1972. She is now married to actor and writer Michael A. Ross, they married on February 7, 1982 and have two daughters, Katie (born in 1987) and Daisy (born in 1990).

During Bill Clinton's years in the White House, a tabloid published a photograph of Post hand in hand with TV producer Linda Bloodworth-Thomason jumping up and down on what appears to be President Abraham Lincoln's bed while on an overnight stay at the White House.

Retrieved from "https://pyramidgameshow.fandom.com/wiki/Markie_Post?oldid=317"
Community content is available under CC-BY-SA unless otherwise noted.