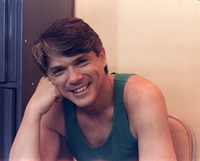 Jay Hammer (born November 16, 1944 in San Francisco, CA) is a former American Actor and Writer. He is more well-known to soap opera audiences as freelance journalist Fletcher Reade on the now-defunct CBS soap opera The Guiding Light from 1984-1998. He perhaps is also best known for (briefly) playing the role of Allan Willis during the 1978-1979 season of The Jeffersons. He once appeared as celebrity guest on The (New) $25,000 Pyramid during a special week of shows titled "Battle of the CBS Soaps".

Hammer became the second and more well known actor to play the role of Allan Willis on the CBS sitcom The Jeffersons. The character of Allan is the son of interracial couple Tom and Helen Willis (played by Franklin Cover and Roxie Roker), he was first introduced in the season one finale episode titled "Jenny's Low" (first airing on April 12, 1975), returning home from a stint in Europe. He has a estranged relationship with his sister, Jenny (played by Berlinda Tolbert), who is anything but happy to see him when he returns home and harbors jealously because of him being able to "pass" as white while she cannot but they eventually reconcile. The character was originally played by Andrew Rubin and only appeared for that one episode.

Allan returns to the canvas in The Jeffersons fifth season, returning home from an extended stay in New York City. Hammer makes his debut on the series in the second episode titled "The Homecoming" (two-part episode: first airing on September 27, 1978 w/ the follow-up airing on October 4th). It's explained that Allan has inherited a warehouse from his late grandfather, which strains his relationship with his father but they eventually make peace.

Jay only appeared in eight of the season five episodes with the episode titled "Louise's Convention" (first airing on April 11, 1979) marking his last appearance on the series. The show's writers felt the character of Allan Willis wasn't going anywhere and as a result, Hammer was fired from the show. In the following season, it is explained that Allan had moved to Minnesota and was never seen on screen again.

He then made the move to daytime television, first playing the role of ranch forehand Max Dekker on the NBC soap opera Texas, first from February 19 to August 12, 1981 and again briefly on September 9 and October 9, 1981.

Hammer's other television appearances include guest-starring roles in The Blue Knight, Kojak, Sons and Daughters, Emergency!, and Adam-12. He also has a background in theater and his theater credits include off-Broadway productions of Passing Through From Exotic Places and Serenading Louie.

The Guiding Light: his most notable TV role[edit | edit source]

In March 1984, Jay landed his most notable role to soap opera audiences: freelance journalist Fletcher Reade on the CBS soap The Guiding Light. He has played this role for nearly 14 years until he parted ways the series in March 1998. He made a brief return in the spring of 1999 and again during one of the show's last episodes before it's end in 2009.

Hammer has made two appearances on the Game Show circuit. In 1987, he appeared on a special week-long "Battle of the CBS Soaps" on the classic game show The (New) $25,000 Pyramid, his teammate was his Guiding Light co-star Leslie Denniston as they competed against As The World Turns stars Margaret Reed & Michael Swan, The Bold and The Beautiful stars Ethan Wayne & Bryan Genesse, and The Young and The Restless stars Melody Thomas Scott and Jess Walton.

In March 1990, Jay appeared on a special "Soap Stars Week" on the daytime version of Wheel of Fortune (hosted by future Entertainment Tonight anchor Bob Goen). He played alongside his Guiding Light co-stars Kimberley Simms and James Goodwin. An article published on March 7, notes that Hammer donated his winnings to his alma mater: The University of the Pacific in Stockton, California.

He was married twice, first to Guiding Light head writer Pam Long, whom he first for five years before marriage. Since 1990, he has been married to Dene Nardi. He has four children (two with Long and two with Nardi), three sons and a daughter.

He resides in New York City where he runs and owns the Spring Lounge Bar in Soho.

Add a photo to this gallery
Retrieved from "https://pyramidgameshow.fandom.com/wiki/Jay_Hammer?oldid=714"
Community content is available under CC-BY-SA unless otherwise noted.