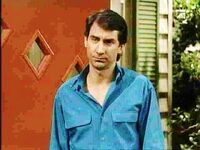 David Garrison (born David Earl Garrison on June 30, 1952 in Long Beach,NJ) is an American Actor in both theater and television. He is best known to TV audiences as the next door neighbor and nerdy Banker Steve Rhoades for four seasons on the FOX sitcom Married...With Children from 1987-1990. He has appeared as a celebrity guest on both The $25,000 Pyramid and The $100,000 Pyramid.

Garrison is primarily a theatre actor, particularly in musicals. He has appeared in numerous productions around the United States, including many Broadway shows. His Broadway appearances include A Day in Hollywood / A Night in the Ukraine for which he received a Tony nomination, Titanic, Torch Song Trilogy, The Pirates of Penzance, Bells Are Ringing and Off-Broadway in I Do! I Do!. He also has many recordings of various musicals to his singing credit.

David has also appeared in a string of supporting and starring roles on television. In 1984, he had a starring role as Norman Lamb on the short-lived NBC sitcom It's Your Move starring Jason Bateman, debuting on September 26, 1984 and ending on February 23, 1985, only lasting less than a full complete season. But it wasn't until 1987 when Garrison landed his best-known role to TV sitcom audiences, next door neighbor and friend Steven "Steve" Bartholomew Rhoades on the controversial sitcom Married... with Children (debuting April 5 on FOX). The character of Steve Rhoades is a banker and friend to Ed O'Neill's character Al Bundy, who often drags Steve into his schemes such as going to strip clubs, chasing younger women, and browsing through pornographic magazines. The character of Steve is also happily married to his wife, Marcy (played by Amanda Bearse), who is also a banker. Steve also enjoys watching sports on television (which Marcy does not approve) but his most prized possession, which he considers his baby, is his luxurious Mercedes Benz which he refuses to let Marcy drive nor touch (she drives the car in the season two episode titled "Impo-dent" in which she crashes it and Steve could heard sobbing off-camera after he sees the damage done to the car).

In 1989, a woman named Terry Rakolta, a resident of Bloomfield Hills, Michigan, led a boycott of Married...With Children after she saw the controversial episode titled "Her Cups Runneth Over" in which one of the scenes where Steve is seen touching the pasties of a mannequin dressed in S&M gear and other scenes include a gay man wearing a tiara, an older man wearing a woman's garter and stockings and a half naked woman removing her bra and her arms later covering her bare breasts. Offended by these images, Terry Rakolta began a letter-writing campaign to advertisers, demanding they boycott the show. She then began making appearances on television talk shows, demanding that the show be cancelled and as a response to these demands, the Fox network refused to air an upcoming episode (which was later named "The Lost Episode") titled "I'll See You in Court" in which Steve and Marcy file a lawsuit against a seedy motel after they discover that the owner of the motel secretly recorded them being intimate. Conflict erupted between the show's producers and the airing network over the episode's content, which prevented the episode from being aired for well over a decade, far past the show's initial television run. Even when first shown on American television in June 2002 (on the FX network), four lines were removed from the broadcast, despite it having already run uncut in other countries. The episode was packaged with the rest of the third season in the January 2005 DVD release (and in the first volume of the Married ... With Children Most Outrageous Episode DVD set) with the parts cut from syndication restored.

Unfortunately for Terry Rakolta, her boycotts did not give her the satisfaction she was looking for. Very little damage was done to the Fox network and Married...With Children itself as nearly all the defecting advertisers had returned and ratings for the sitcom went to even greater heights. Rakolta herself has acknowledged that her boycott had contributed to the show's higher viewership. She has been referenced twice on the show (which some TV viewers saw as revenge on Rakolta) in episodes titled "Rock and Roll Girl", when a newscaster mentioned the city of Bloomfield Hills and "No Pot to Pease In" in which a television show was made about the Bundy family and then was cancelled because (according to Marcy) "some woman in Michigan didn't like it".

Aside from all the controversy, Married...With Children continued on well into the new decade but Garrison was soon looking for a change of pace. He decided that he no longer wanted to be tied down to a weekly television series, preferring to avoid being typecast in one role, and wanted to devote more time to his first love: theater. He reached an agreement with Fox to buy out the remainder of his contract as his final appearance on Married...With Children aired on February 4, 1990 in the episode titled "Rock and Roll Girl" (one of the episodes which Terry Rakolta was referenced in). It was written into the story that Steve grew increasingly tired of Marcy's controlling behavior and their yuppie lifestyle as he leaves her to pursue his interest in the outdoor and later becomes a Forest Ranger at Yosemite National Park.

Garrison later occasionally reprised his role as in a handful of episodes in later seasons, beginning with the episode titled "The Egg and I" (aired on February 16, 1992) as Steve, on the run from the law after stealing a rare Hawk Egg from Yosemite National Park, returns to reclaim his old life with Marcy only to discover that she is now married (after a drunken night on the town) to her second husband, Jefferson D'Arcy (played by Ted McGinley) as the two men physically fight over her.

In the season eight episode titled "Banking on Marcy", Garrison does not appear but his character's name was called out by Marcy. In the season nine episode "Get the Dodge Out of Hell", Steve pretends to be a big-shot businessman but turns out to be a chauffeur instead. He made his very last appearance in the episode titled "Radio Free Trumaine" (aired May 7, 1995) in which Steve is now the chancellor of a college in which Bud Bundy (played by David Faustino) attends. This episode was to be the pilot of a possible spin-off series which never came about.

After he left Married...With Children in 1990, Garrison returned to his first love: theater. He went on a national tour of Guys and Dolls in which he played Nathan Detroit followed by other roles such as the Devil in Randy Newman's Faust, Henry Carr in Travesties (Williamstown), Frosch in Die Fledermaus (Santa Fe Opera), and Charley in the Arena Stage revival of Merrily We Roll Along for which he received the Helen Hayes Award. He was also in a 1996 Pasadena production of You Never Know at the Pasadena Playhouse.

David eventually returned to television in guest starring roles on various TV shows which include Law & Order, Without a Trace, Everybody Loves Raymond, NYPD Blue, Murder She Wrote, and The Good Wife. His only known appearances on the Game Show circuit was appearing as a celebrity guest on both The $25,000 and $100,000 adaptations of the Pyramid franchise.

He originated the role of the The Wizard in the original touring company of Wicked when it began on March 8, 2005. He finished his year-long run on March 6, 2006 and was replaced by PJ Benjamin. Later he starred again as the Wizard in the Broadway company from April 4, 2006 replacing Ben Vereen. After 15 months in the role he played his final performance on July 8, 2007 and was later replaced by Lenny Wolpe. Then he temporarily starred in the Chicago company from September 30 – October 28, 2007 while Peter Kevoian was on medical leave. Garrison then starred in the Los Angeles company beginning August 26, 2008 replacing John Rubinstein, until its closure on January 11, 2009. More recently he played the role in the San Francisco production which officially opened on February 6, 2009. He played his final performance with the production on May 31, 2009 in order to pursue his role in a new play. He was replaced by Lee Wilkof

From November 21 to December 29, 2013, he played Fagin in the Paper Mill Playhouse production of Oliver!.

Garrison has never married and has no children. He has never spoken about his personal life, causing some to speculate that he is either gay or bisexual. Amanda Bearse who played his wife Marcy on Married...With Children publicly came out as a lesbian in the early 1990s.

Retrieved from "https://pyramidgameshow.fandom.com/wiki/David_Garrison?oldid=632"
Community content is available under CC-BY-SA unless otherwise noted.