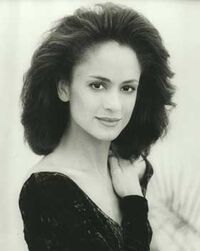 Anne-Marie Johnson (born July 18, 1960 in Los Angeles, CA) is an African-American Actress, Model, and Impressionist. She is best known to TV audiences for her portrayal (and most notable role) of Althea Tibbs on the NBC/CBS Crime Drama In the Heat of The Night (1988-1993) and well as portraying various characters on the FOX comedy sketch series In Living Color. She once appeared as a celebrity guest on The (New) $25,000 Pyramid.

Born in Los Angeles, California, a graduate from UCLA with a degree in Acting and Theater. In 1979, Anne-Marie appeared as a contestant on Card Sharks (she was credited as Anne Johnson, describing herself as a part-time model & a great tennis player) but lost. She later appeared as a contestant on the game show Child's Play (hosted by Bill Cullen) and also on one of the earliest episodes of Body Language (hosted by Tom Kennedy), she was credited on both shows under her full name, Anne Marie Johnson, describing herself as a "struggling actress." on both shows. In 1987, she appeared as a celebrity guest on the last episode of The (New) $25,000 Pyramid (the show returned to the airwaves in 1988) and as a panelist of the early 1990s revival of the classic Game Show Match Game.

Johnson soon began to move up in the acting world as she began landing guest starring roles on various TV shows and movies. She landed her first acting role in the second season of the NBC sitcom Double Trouble as a character named Aileen Lewis. She went on to appear in the 1985 syndicated series What's Happening Now!! (as Raj's wife Nadine Hudson Thomas).

In the Heat of The Night: her notable TV role[edit | edit source]

But it wasn't until 1988 when she landed the role that would make her a household name and her most notable work to TV audiences, in the character of Althea Tibbs on the cop crime drama In the Heat of The Night (debuting on March 6, 1988 on NBC then moving to CBS in 1992) starring former All in The Family star Carroll O'Connor and film & TV actor, the late Howard Rollins (who played Johnson's husband Virgil Tibbs on the series).

Anne-Marie was a series regular on In the Heat of The Night for the first six seasons. Her character, Althea, worked as a teacher and counselor at a high school (and well-loved by the students) in the fictional town of Sparta, Mississippi. Althea's life in Sparta was described as extremely difficult. She often struggled to deal with her husband Virgil working for the police force with the possible dangers he faces day in & day out. In the season three premiere opening episode titled "Rape" (first airing on October 24, 1989), TV viewers saw Johnson's character being brutally beaten and violently raped by a colleague at the high school as a furious Virgil seeks out the man himself after there is literally not enough evidence to prosecute his wife's attacker and he literally struggles to help her cope afterwards. Anne-Marie received praise from TV audiences & critics for her portrayal of a rape victim with one describing her performance as "Raw, Emotionally Realistic & Captivating".

In season six, first beginning in the episode titled "A Frenzied Affair", following up with the episode titled "Discovery" (both episodes first airing on November 18, 1992), TV audiences witness Althea falling into a deep dark depression and suffering a mental breakdown after she witnessed the suicide of one of her students, who was deeply troubled. Anne-Marie parted ways with In the Heat of The Night after the sixth season ended and her character was written out of the series but it was later explained (as her TV husband Howard Rollins returned for one episode in the 7th season) that Althea hated life in Sparta, she hated Virgil's line of work on the police force and that she never fully recovered from the suicide of her students or her being raped. In conclusion, Althea separated from Virgil, took their children and moved back to Philadelphia, living with her parents.

In Living Color & other appearances in TV & Movies[edit | edit source]

After she left In the Heat of The Night, Anne-Marie went to appear as a series regular on the comedy sketch series In Living Color (during it's last season, 1993-1994) on the Fox network. She has portrayed various celebrities on the program including Oprah Winfrey, Shari Belafonte, Robin Givens, and Whitney Houston.

She afterwards portrayed Alycia Barnett in one season of the Fox series Melrose Place (1995–1996) and had a recurring role on the CBS television series JAG as Representative Bobbi Latham. As well as guest starring roles on shows which include Mad About You, The Parkers, That's So Raven, Hannah Montana, and Bones. She also had a recurring role on the sitcom Tyler Perry's House of Payne as Liz Shelton.

In 2005, Johnson was elected First National Vice President of the Screen Actors Guild and in 2010, she was succeeded by Ned Vaughn.

Anne-Marie is married to Martin Grey, since 1996, they have no children.

Retrieved from "https://pyramidgameshow.fandom.com/wiki/Anne-Marie_Johnson?oldid=709"
Community content is available under CC-BY-SA unless otherwise noted.